Read up on Permanent Establishments & BEPS! 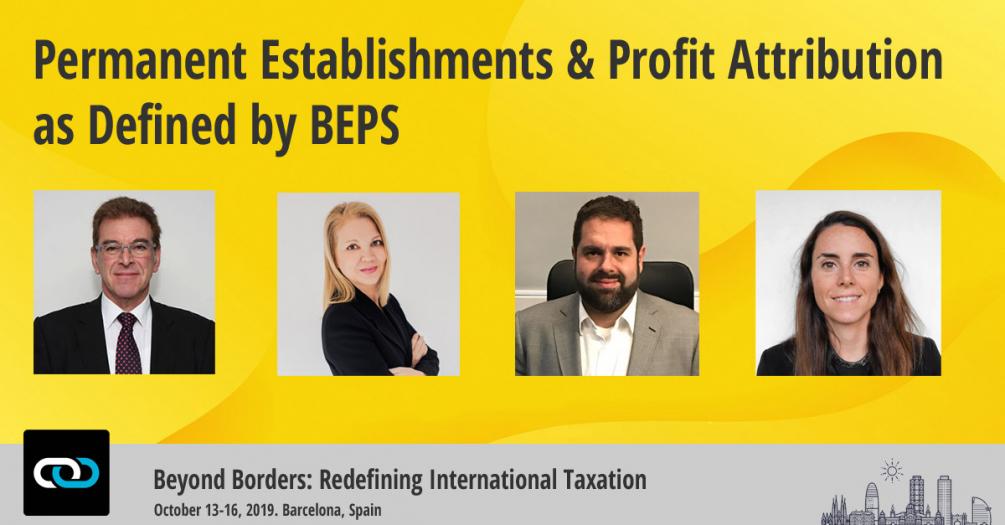 We’re down to our final two transcripts for the panel discussions held during our second annual international tax conference in Barcelona.

Find here the full transcript for our panel on permanent establishments, BEPS, the OECD’s influence and a whole lot more.

Below are some of the main highlights!

How do you know it's a permanent establishment, particularly in the developing world?

Ronaldo Apelbaum: “I think that the biggest problem that we have in this place is not exactly if you really have a PE established there or not. What does this means at the end of the day? So, okay, I have a PE in Brazil. I'm rendering services in Brazil. It's characterized, so the state tax authority, the municipal tax authorities, the federal tax authorities, the labour tax authority, the whatever, they will ask you to have your tax ID and pay taxes there. So the challenge is: Which taxes? How much I'm going to pay? What is the base?”

But then you have the second question: If you have it, how do you tax it? Because it might be, very well, that once you have a permanent establishment, the outcome is that you have nothing to tax.”

How does the digital economy play into perhaps redefining or reshaping how permanent establishment is understood?

Peter Wilson: “If I can just walk back, maybe a year or two or three, and look at the action reports in 2015 and see what came out of the action reports, specifically in relation to PE. The OECD hated the commissioner arrangements. They hated the desegregation value chains. They hated arrangements where contracts were wholly negotiated in one country, but signed somewhere else. They hated all those. And they said we're going to do something about that. And they set about so-called fixing them by probably spending half of all the pages in the multilateral instrument (MLI), trying to deal with all those. And even that doesn't seem to satisfy the OECD because, notwithstanding 30 or 40 pages on trying to counter all those… And I had a look last night, notwithstanding one of the developing countries having posted a reservation in the MLI notifications against those particular articles in the MLI, the OECD still doesn't think that it has done enough to counteract the PE, even though they believe the digital economy is not separate, it’s part of the total economy. So the Secretariat has brought forward this proposed approach, which is going to be dead in the water, for sure. The international accountants won't like it because it's going to require the auditors to make sure that the financial statements are right. And we know the auditors in recent years in a large number of country companies haven't been able to get the financial statements right. The CFO is going to have to put more information in financial statements than what they really have access to under the current software. They're going to have to get information from some body on what's routine and what's not routine. They're going to have to deal with the pressure from India and China on the marketing intangibles, which is basically where the big push has come from and you can see that in the analyses of those countries, transfer pricing materials that were launched in an attachment to the earlier UN transfer pricing document. I just don't see how, notwithstanding the inclusive process, etc., etc., that they can really get closure on this by what they say is the end of 2020 to produce something that people are going to buy off on.”

From the point of view of permanent establishments within the unified approach or within the digital economy, are there challenges that are maybe specific to certain jurisdictions that anyone else wants to address?

Cristina Villanova: “if you look at the MLI, in the end not even 50% of the countries have signed for the Article 5 of permanent establishment. So in the end we’ll have less than 50% that incorporated or have selected Action 7. So, this means that if you need both countries to have selected Action 7 it would never have an impact. So, as you say, we've been doing so many changes and probably in real life is not going to be an impact. But it's true that companies are changing and nowadays with digital economy, and I understand that Brazil may be a really difficult country and it's obvious that having 90 taxes doesn't look really easy, but this is how businesses running right now. Business is changing so the rules on permanent establishment obviously are changing and we cannot look into physical presence but rather based on sales, which is where we're going. So if a company actually have biggest sales in Brazil, they will need to stick to the 90 taxes and, of course, it's going to be a big burden for companies.”

An Introduction to Project Management: A Discussion
by
17 Jan 2020
Wealth Management & Tax Opportunities in Hungary: A Webinar
by
15 Jan 2020
Read up on Permanent Establishments & BEPS!
by
10 Jan 2020
Transcript: Is the US the World’s Favorite Tax Haven?
by
08 Jan 2020
Brexit as Discussed at #TLTaxCon19: What Did They Get Right?
by
27 Dec 2019
Menu
JoinLogin